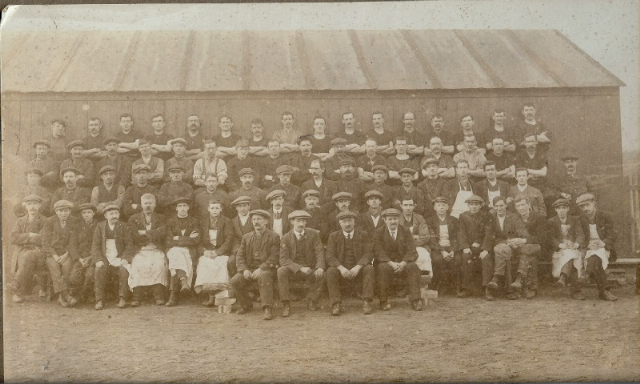 Kinghorn Cleekworks circa 1914 - with thanks to Alex Cook for the photo.

William Alexander Gibson was born on 12th August 1867 in Melrose, Roxburghshire. He was the second eldest of the six children of William Gibson, tailor, and his wife Margaret Chisholm.

In 1872, when William junior was five years old, the family relocated to Kirkcaldy, where William Gibson senior set up a business as a tailor in Charlotte Street.

In 1881, at the age of 13, William junior was working as a floor cloth worker in the linoleum industry in Kirkcaldy. He was later apprenticed to Henry Ritchie, blacksmith in Sands Road, Kirkcaldy. In 1891 census he can be found working in Musselburgh as a blacksmith, probably learning his trade of cleekmaking at McEwans the famous cleekmakers in Musselburgh.

In 1892 William married Alison Mackenzie and the couple initially made their home in Anstruther where their daughter was born in 1893. It was here that another famous cleekmaker James Anderson was based and where William would continue his training. However, William Gibson was back in Edinburgh by 1895 when his eldest son was born.

In 1897 he went into partnership with Walter Stirling and set up a company, Stirling and Gibson, making golf cleeks (the head of the golf club) in Jordan Street, Morningside. Initially there was only one furnace, but demand increased and fairly soon they expanded to six furnaces. This partnership ended after only two years when his partner passed away suddenly in 1900 at the age of only 24.

Thomas Andrew Cochrane had been born in Leith in 1871, the youngest of the nine children of John Cochrane and Margaret Pringle. By 1891 he was training to be a lawyer and eventually went to work in London as a civil servant in the Department of Works. Very much a silent partner Thomas Cochrane remained chairman of the company until it went into receivership in 1955.

The company of William Gibson & Co. continued to expand and they looked around for new premises. In October 1902, a quarter of an acre of the lands of Bowbutts, on the south side of the Bleaching Hill, were advertised by Kinghorn Town Council to be feued by public roup. William Gibson purchased the feu from Kinghorn Town Council. The business moved to Kinghorn the following year.

In May 1904 the Fife Free Press reported on the new business at Bow Butts. There were 15 forges for the shaping of cleeks and several emery wheels for polishing them driven by a 12 horse power gas engine.

The company were producing 100 dozen (1200) of all kinds of irons per week. The business flourished and William Gibson soon had to extend the premises.

At first the company only made the cleeks (the metal heads) of the golf clubs, but by 1906 they were making the complete clubs with the hickory wood handles.

In order to accommodate the additional business of assembling the complete hickory handled clubs in 1906 William Gibson obtained a works in Taylor’s Close, better known as Buttercup Close for it’s association with the Buttercup Dairy. This workshop was the previous hecklemaking shop belonging to Edward Taylor.

In February 1913 Wm Gibson and Co applied for planning permission to build a new factory in Baliol Street, Kinghorn. The land had been purchased from the trustees of the estate of the deceased Alexander Dunsire, keeper of the Kinghorn Hotel. The new building included: forge, sawmill, wood turning, clubmaking and general finishing departments. The Fifeshire Advertiser for the 26th July 1913 reported that the company were ‘flitting’ and moving their machinery into the new works ready to start production after the holidays. This brought most of the manufacturing onto one site. The Bow Butts site was sold back to Kinghorn Town Council and the extra strip of land, bought in 1910, was sold back to the original owners.

In 1919 William Gibson travelled to the USA and purchased 9000 acres of hickory forest. Here the trees were cut, graded and made into blocks for shipping to Scot-land.

By 1921 the company had recovered from the war and were doing well with a shop in Berkely Square, London and sales worldwide. Early in 1921 they sponsored a golf tournament at Kinghorn Golf Club and provided £200 in prize money, which attracted several well known golfers. It was, therefore, a blow when William Gibson collapsed and died suddenly at the age of 54.

William Gibson had been a Town Councillor in Kinghorn for 15 years and a Magistrate of the burgh for ten of those years. He was a Justice of the Peace for Fife, a member of Kinghorn United Free Church and belonged to the St. Leonards Free Masonry Lodge in Kinghorn. He was survived by his wife, a daughter and two sons. His eldest son, William, had been killed in action during the war.

After William Gibson’s death George Smith took over the day to day management of the company and Thomas Cochrane continued in his role as chairman and the company flourished during the inter-war years. Thomas Cochrane and his wife eventually moved to Kirkcaldy and he was then able to take over the management.

During WWII golf club manufacturing increased in the USA whilst it was reduced in the UK. Steel shafted golf clubs also replaced the old hickory wood.

After the war Gibson’s found their market for golf clubs had been reduced by the increased production in America and they struggled to compete. They adapted to making steel shafted clubs and the firm survived for another ten years.

The final company report cites several reasons for the eventual demise of the company: a worldwide recession in the golf trade; difficulty keeping skilled workers in Kinghorn and a closure of some of the most lucrative markets such as Japan, where the ports had been closed for several months.

The company finally went into voluntary liquidation on 1st July 1955. Thomas Cochrane had been chairman of the company for 45 years. He died in 1958 aged 86.

The land in Baliol Street was eventually sold to Kinghorn Town Council and is now the site of the present Kinghorn Primary School.